So I am at U.S. Adult Nationals in Hyannis this past spring, in the exhibit hall amongst the racks of sequined dresses and jewelry and skate guards and Dick Button memoirs, and I hear someone say “Did you go to MIT?” And I turn around and it is my friend Mickey, who I haven’t seen since I graduated in 1982. 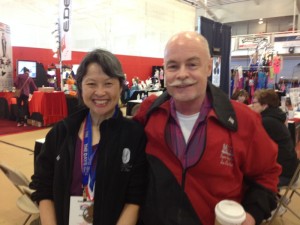 As we say in Minnesota, how great is that? Mickey was there to see a former pairs partner, and he happened to watch our free dance. And we chatted about all the good times at the MIT Skating club in its early days. I am so glad to hear that Mickey is still skating, in fact teaching skating in the Boston area.

Mickey mentioned that he had seen my good friend Pete, who was at my wedding in 1990, but who I haven’t seen since. This meeting inspired me to email Pete, who replied almost immediately, and and after a few emails back and forth, we made plans to get together again. We met yesterday for lunch mid-way between Brunswick and Newton, MA, in Portsmouth, N.H. It’s been nearly a quarter century since we’ve seen each other!

So a little bit of my skating history. I did not skate much as a kid, beyond a couple of turns on double-runner skates (ack!) at the makeshift rink down the hill (they flooded it one winter), a few skating parties, and some wonderful times, especially with my friend Connie, when the lake at Hudson County Park froze over. (I actually found a poem, aptly titled “Skating at Hudson County Park,” about skating there.) I did a little my first couple of years at MIT, on the freezing outdoor rink. 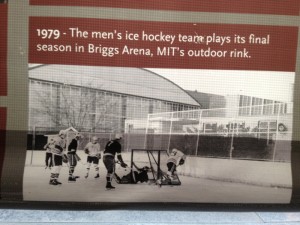 But when I was a junior there, they built a brand-new indoor rink (which they’ve obviously renovated since, hence the picture below).

I remember going to the open session with my seven-dollar garage sale skates, and being hooked. Ah, that first waltz jump! I went back nearly every day following, and did a PE class, then started lessons the following year with Barbara Pinch at Boston University. I met some wonderful people when we founded the MIT Skating Club: Mickey, Rachel (who I visited in Australia a few years ago), Peter M. (who gave me a tour of the Pentagon when he worked there–I will never forget eating burgers at Ground Zero), Ike, and Charlie (who took me through my first dance test, the Dutch Waltz). And of course, Pete, skating friend extraordinaire.

Pete lived at Baker House too, and he and I caught the skating bug together. We learned our single jumps together, goofed around on dances, watched skating on television, and sat in rapt attention on the bleachers at the Skating Club of Boston watching some of the competitors practice. I remember watching Laura Beardsley (whose claim to fame for me was not only because I saw her coaching a very young Todd Eldredge, but also because she was a former partner of Jim’s) do a lovely show program to “Endless Love.” I also remember watching Ari as a competitor (and now he’s my coach, how great is that!)

Pete and I met in Portsmouth yesterday. There was a power outage there, but we found a place to eat and then walked around and talked pretty much nonstop for hours. There was a lot to catch up on, and we spent quite a bit of time on the heart of the matter: skating! Pete has been off the ice for some time now, but he is going to get back on. I know that when he does, some order will be restored to the universe. I know that because, well, because I just know. If there is one thing I learned from studying physics, it’s that everything has a reason (or maybe it’s that we give everything a reason).

Here’s the sad part. My mother died last April, and it’s true what they say: that if you love someone, the time you have with them is never long enough. She was 93, but still, it wasn’t long enough. Skating has been one way of coping with the sometimes overwhelming grief that I’ve been feeling. I have been so touched by all the folks at the rink who’ve reached out to me. Tom told me about his mom, who passed away five years ago and who still waves to him in dreams. Ari, along with his intense scrutiny of all the problems with my back crossovers, always says something to make me feel better emotionally; when I had a terrible nerve injury some years ago that put several fingers out of commission, he said “You don’t need those fingers to skate!” and after my mother died he said, “You need to remember that a lot of people love you.” One of the wonderful things about skating is that you realize that it’s not just the ice that supports you and allows you to glide forward.

It’s because of Pete that I learned this lesson early in my skating career. When I went to graduate school, Pete was one of the people I missed most. While I was in grad school, he sent me a great short story that he wrote; after we reminisced about college and skating, Pete was kind enough to stay up too late last night and re-type it for me. Here’s the story, written October 30, 1983 for 21.755 (Short Stories). I want to share it on this blog along with his future skating adventures, so I’m inviting him to be a guest blogger (how cool will that be!). When I told her that I would be reconnecting with Pete, my skating coach and dear friend Laurie told me that in times of need, the spirits come to help you (she had a cool dream about ice dancing with Charlie White, but I’ll let her tell that story). So thank you, spirits, for sending Pete back to me! 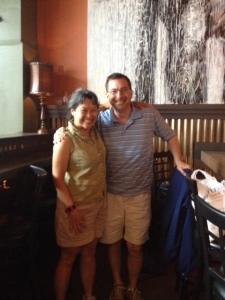 One thought on “Reunion with Pete and other skating matters”