I had a lesson with Laurie this week that made me think about some of the gaps in my skating: those interruptions in flow that cut down on my power and speed.

One gap happens as part of my regular glide forward. There is a missing part of my “knee-cycle.” I have the strong push and rise onto the outside or inside edge, but then I almost immediately sink and push onto the new foot.  What I am missing is that additional part of the glide; as the free foot comes in out of the extension, the skating knee and ankle bend more, thus attenuating the edge and allowing it to deepen. This improves my edge quality and deepens my knee bend: a double bonus!

Another little interruption happens on forward transitions such as those from the right outside to left outside edges. What I was doing was keeping my right foot moving in the same direction and trying to set my new (left) foot at what became an awkward angle; this made for a major glitch in the beginning of my new edge. (This movement never made sense, so don’t ask me why I did it over and over.) I have to allow the right foot to turn out so I can get a good push and set  the new (left) edge on the same axis, not veering off suddenly into the void of nether ice. It almost feels like retrogressing.

Finally, there’s the push of the right foot onto the left outside edge (for instance, in back chassés).  To start, I need to get a more stable position on my left outside edge. This means literally turning my femur bone out in the hip socket, which sounds dramatic but actually puts me in a good place. It also means using my right foot and and calf muscles much more than I have been doing on the push.

It’s interesting how these changes involve not only engaging new muscles (such as the right foot and calf), but also releasing others (such as the knee and ankle in that “knee-cycle” thing). If I think only of activating muscles to pull and push, I tend to grip and clench in ways that make me tired and sore. But if I simply release through the knees and ankles and keep my hips over my blades, everything happens much more easily.  I feel a marked difference with these changes: more control, lower center of gravity, deeper edges, added power. I think this will help with building acceleration rather than simply maintaining speed (balancing and coasting on shallow edges). 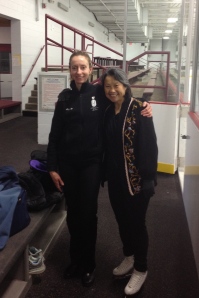 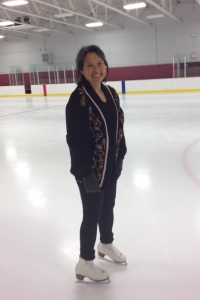 So mind the gap! Speaking of gaps, this open front sweater is warm but not suitable for skating since there are no buttons to keep the draft out. I’ll wear it, but probably not for skating. (Of course, there is always that cross stroke exercise with arms crossed in front that Ari gave me. Maybe if I need additional ways to drive myself insane, I’ll wear this sweater so I have to hold it closed).

There is certainly satisfaction in closing up spaces, in feeling like you can smooth out motion or life in general simply by making sure all the holes are filled up. My mom was always minding certain gaps for me. Visits to her always involved food to take with me. If I was going by car, she’d make an entire takeaway meal so that I didn’t have to cook dinner when I got home. After I moved farther away, it was fruit and snacks for the airport, plus cans of things that I couldn’t get at home (my favorite variety of marinated bamboo shoots, dried Chinese mushrooms) stowed in my suitcase. She and my dad saved up money not only for my college education, but also to see me through graduate school (expecting, of course, that I would go to graduate school). After I changed plans in college and moved away from the security of a career in the sciences, she socked away more money to tide me over what she feared would be my inevitable post-graduate unemployment. Happily, her fears did not materialize. I did find a job, so this was money that eventually went towards my first car.

Although Mom made nearly daily trips to the grocery store (she firmly believed in regular fresh produce and fruit), she also stockpiled necessities whenever they went on sale. So there was never any question of running out of paper goods, cereal, cleaning products, ice cream. I think of her whenever I go to Costco to buy what seems like obscenely large quantities of food and supplies. (Four gallons of milk? Teenage boys . . .)

But she was definitely not a hoarder; in fact, she quickly gave away things that she didn’t think she would use. Like this sweater, which she got from my aunt (I think) and passed along to me years ago.

Closing the gap can mean making sure the right things are in place so that basic needs are always supported. Hips level, head up, tailbone down, navel up, left femur in the correct place. And it’s also letting go of certain things just as often–easily, gracefully, and without hesitation.