So I skated a session today that I don’t normally skate. It’s not an ideal session for practice. For one, it’s chockfull of families with small children. For two, I felt pretty stiff and a little tired this morning (that left side is feeling the pressure to function normally). For three, I’ve gotten a little spoiled by the peaceful routine of my normal practice ice. Sometimes I’m the only one there and have a fresh sheet of ice to myself (remind me to bake brownies for the guys who work at the rink again, it’s about time) and most of the time it’s just the regulars practicing so everyone knows how to avoid collisions.

But my older son was inviting some friends over to study math, and after baking them cookies and sneaking into the dough, I decided to brave the chaos.  And chaos indeed it was, lots of beginners and uncontrollable hockey tykes whose parents simply drop them off at the rink without supervision. This means I spent some energy being part of the rink police. With two sons, I’ve gotten pretty good at the reprimands (“Get that stick off the ice!” “Keep that glove on your hand!” “Watch out for other people!”)

Surprisingly, though, it was really fun, too. Part of it was just letting go of thinking of it as a real practice.  Instead, I spent quite a bit of the time just thinking about how to be into the ice: not just balancing or pushing off for transitions, but applying pressure down into the ice throughout the edge. I played around with two-footed counters (which I’ll add to my two-footed rocker exercise). I tried to get my bearings on that left back outside edge with the turned-out extension. And so on.

Lots of little things all over the place. Cute babies all bundled up in that adorable fleece baby wear, and toddlers waving their arms frantically as they got scooted around the ice. Lots of little kids in hopeful skating mode, working on figuring out their different modes of frozen locomotion. Just like me.

Came home and there were Calculus 2 notes–and cookie crumbs and popcorn and leftover pizza–all over the dining room table. The kids were taking a break from mathematics and playing-hide-and-seek all over our house, hiding in the attic and in the closets and in the shower. 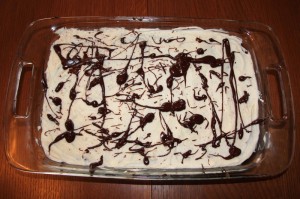 Here’s a picture of a cake I baked a few years ago for Ari’s birthday. A little out of control on the drizzled chocolate! I joked then that it was like the tracing of our free dance on a bad day. But now I see that it was a good day after all–just a little chaotic.