Happy Pi Day! Gotta love this particular one: 3.14/15. We are celebrating at 9:26 with different kinds of sweet and savory pies.

In honor of Pi Day, some reflections on skating in circles.

In years past, I have never fully appreciated the circular patterns at the core of ice dancing. I think I was so fixated on balancing on top of my skates that I didn’t focus enough on the larger shapes in compulsory dances or the free dance. (Stay erect and move forward at the same time? Too much for my pea-sized brain to handle!)

But now I have grown to fully appreciate that thinking in circles makes what we do on the ice easier. Take progressives, for instance. It is so tempting to push really hard into that first outside edge, shortchange the second (the underpush onto the inside), and then try to make up the loss of energy with the third push back onto another outside. This means that my progressive sometimes looks like the top half of a clown shoe (and feels just as bad).

But place the same progressive on part of a circle and the difference is amazing: even pushes, consistent depth of edges, less fatigue, and no more clown shoe!

I am trying harder now to think about the different moves in a compulsory dance not a linear sequence of steps, but as edges tracing segments of circles. If you look at compulsory ice dance patterns, the circles are always there, dictating edges and placement, telling us what to do and where to go.

Many of these dances have the same basic shape, with different edges and turns tracing out several lobes down each side and an end pattern.

The circle rule hold true for harder dances as well, such as the Golden Waltz (the competitor’s version). Here’s the basic pattern. 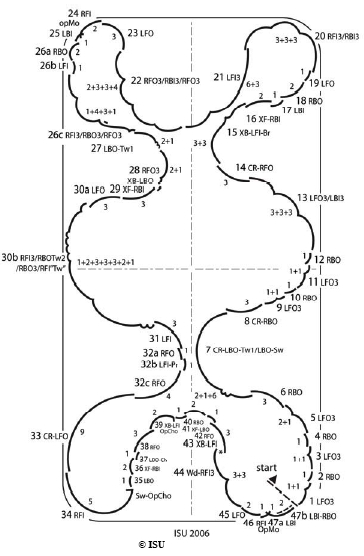 If you squint hard, this general idea doesn’t look that different from the patterns of preliminary-level compulsories such as the Dutch Waltz or Canasta Tango. In fact for those of us who need reading glasses for the fine print, the similarities are striking. Take away the twizzles and other fun stuff, and it’s just a grown-up Dutch Waltz, no?

Okay, I don’t really believe that. But the principle of circular motion is similar.

A circle is basically a set of points that keep the same distance from a fixed central axis. We go round and round, maintaining our space from the center. If we cut inside or outside, hoping to save some time or energy, we wind up compromising what we set out to skate in the first place.

Ice dance is not alone in its circular motions; here’s a fun picture from the frontispiece to Thomas Wilson’s Correct Method of German and French Waltzing (1816). 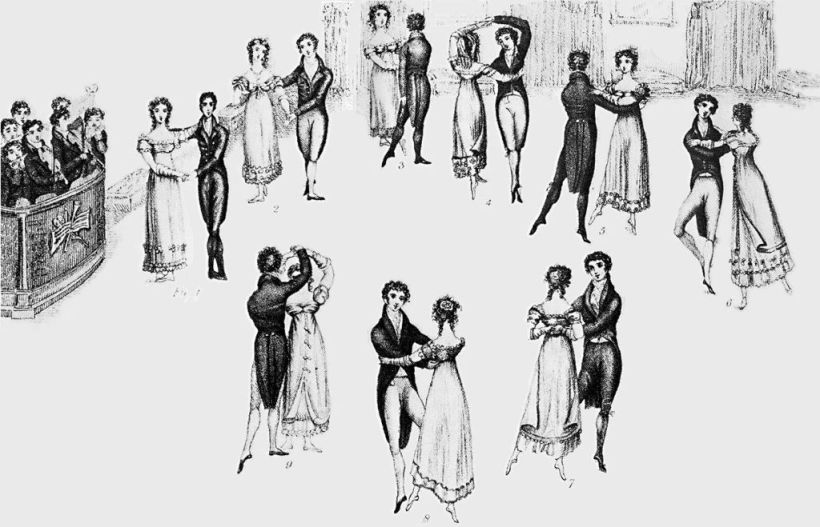 Detail from frontispiece to Thomas Wilson’s Correct Method of German and French Waltzing (1816), showing nine positions of the Waltz, clockwise from the left (the musicians are at far left). At that time, the Waltz was a relatively new dance in England, and the fact that it was a couples dance (as opposed to the traditional group dances), and that the gentleman actually clasped his arm around the lady’s waist, gave it a dubious moral status in the eyes of some.
(from History of Dance, by Mary Clarke and Clement Crisp)

But with circles galore, waltzing is double the fun on the ice! Here’s Scott and Tessa in the 2010 Olympics, whose Golden Waltz really captured the beauty of going round and round, especially in waltz tempo.  You can see the circular motion from their heads down through their feet. I especially love the action of Scott’s tails and the camera angles that show their skates!

4 thoughts on “The circle game”