Following up on my binge-watching of the Grand Prix Finals, I discovered a video interview with Scott and Tessa from last month. It’s part of a series of interviews with Dave Wilson called “The Skating Lesson,” and there are all kinds of interesting folks on there.

I really enjoyed hearing Scott and Tessa talk about what it’s like to train with the best ice dance teams and coaches in the world and  win the Olympics. Much of it is undoubtedly what my fellow skating blogger George has referred to as “unobtanium.” (Another fellow skater/blogger, Mary of FitandFed, pointed out that this is from the movie Avatar, not that particular element on the periodic table that was named in honor of adult figure skaters!) But one thing that Tessa described did resonate with me personally. That was when she described what she did to avoid a third surgery after she was diagnosed with compartment syndrome in her calves.

She describes re-training her body to analyze her body mechanics and what she was doing to cause the pain and numbness. It is really amazing to hear someone who is much closer to skating divinity than I am talk about having to re-learn movement from the bottom up. That means breaking it down: not just skating technique but even standing and walking.

“Recruiting different muscle patterns.” Whoa, is that ever familiar! I’ve been reading Katy Bowman’s Every Woman’s Guide to Foot Pain Relief: The New Science of Healthy Feet (2011) this week, and realizing that I still have some pretty fundamental work to do with alignment, strength, and flexibility. Time for more off-exercises!

Going back to basics on my last set of skating lessons as well, stressing two related ideas on progressives, cross strokes, and the entry edge on turns.

First, I still tend to flatten at the end of edges, rather than bending my ankles and deepening my edges. The correct accentuation of the edge will make the edge accelerate, and allow for more speed. This bend will also make it possible for me to make smoother transitions, since I will be pushing onto rather than just stepping on the new skate.

Second, I need to use the energy of the push to propel the free side as well as the skating side. Laurie and I worked on that last push in the progressive before the series of cross rolls; that push onto the forward left outside edge also moves the left leg forward and across (like a grapevine step).

What I’m finding is that I do not always allow enough motion to happen in the hip joints, especially in places when I have to cross or scissor my legs. I will have to give this more thought, especially because I’ve gotten so used to trying to keep hip movement under check. Hmmm. . .

While I ponder that, I’m going to share some fun pictures of Chris and Lisa. I noticed that they were wearing the same color scheme one day and asked them to model their new pairs program for me. Since they are both into singles, modeling is about as far as their pairs career goes right now–but who knows? 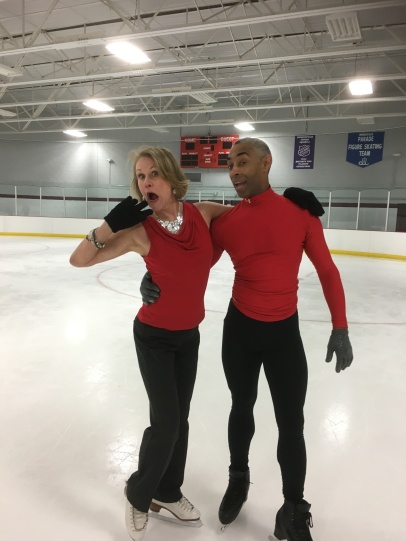 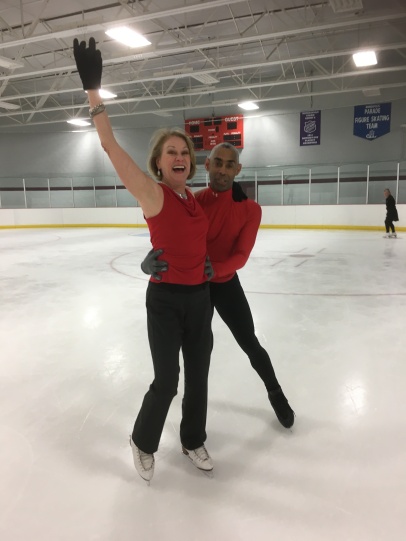 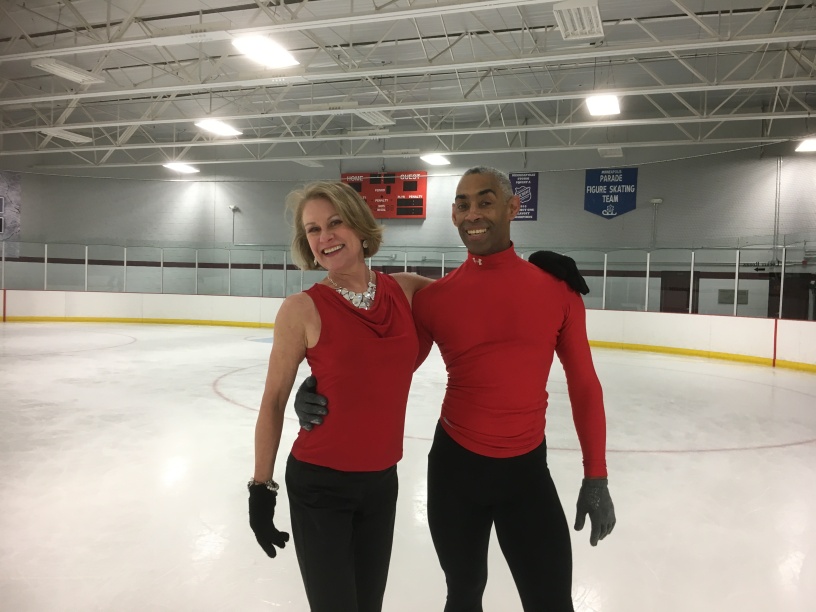 4 thoughts on “Break it down”