It is has been a rocky road on the way to my total skating makeover, but I’ve decided that constant criticism and self-deprecation are not the way to go. I haven’t really been yelling at myself, but that snarky little inner voice (“what the heck are you doing?”) has been pretty vocal lately, to the point that I can detect it even in my highly censored little Mary Sunshine blog.

I have made some pretty important discoveries this year, like realizing that I need to work on my right ankle strength and mobility, or not popping my ribcage, or shifting that right side slightly more to the right (wow!). Every time I figure something new out, it’s like I have an entirely new body part to keep in mind–and to keep track of.

This has been both psychologically and physically exhausting.  I feel like every week I discover a new set of muscles that I haven’t been using. I am constantly sore in different places, and sometimes I’m so tired at the end of the day that I don’t know what to do.  I sit down to do some stretching and I think, just shoot me now and have done with it.

And then I start laughing, because this is really all my doing. I’m the one who wanted to learn how to skate correctly–not just barrel through different motions, but really learn how to do them. And this is exactly what it takes.

I can either accept this and embrace it for what it is, or I can turn and run full tilt towards another activity. Like. . . hmmmm. . . .

Okay, let me tell you about my great discovery this week, which happened while I was having a lesson on (surprise!) forward progressives in a circle. Laurie told me that I wasn’t engaging my quads as part of my extension, which meant that I wasn’t fully straightening my free leg and I wasn’t completing the push and I didn’t have the force of the extension to counter-balance the skating knee bend.  Which is quite a mouthful, but then again, this was quite the revelation.

I haven’t been thinking much about my free leg extension at all. In fact, if I had to sketch out who I thought the main character of my skating body drama was, it would definitely have been the skating leg.  Yes, the skating leg would dominate, and the free leg would just be the sidekick, just sort of hanging out at best or at worst just dangling there while the skating leg charmed or used its spidey-sense or kick-boxed its way out of any sticky situation.

But no more. Once I actively engaged the quad of the free leg, it became its own raison d’être. I realized that this was not just about getting an attractive extension, but about a fundamental principle of balance. Without the necessary muscle tension on the free side, there is nothing to counter the awesome force of the skating side.

So instead of sitting there inadequately stretching (I’ll do the stretching later) I look at pictures of ice dancers and think about how they are engaging the quads on their free legs. After all, as Laurie said, this not only looks better, but “it’s correct.” 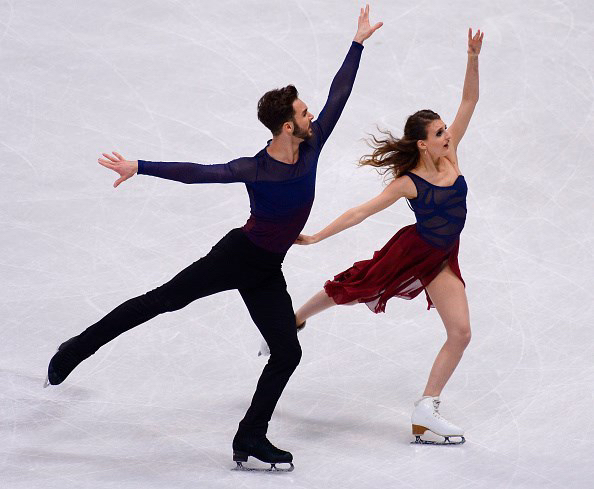 Awesome use of quads on free legs!

A few pictures later and the snarky voice is silenced by the joy of contemplating fabulous free legs! My free leg is my friend!

6 thoughts on “My free leg is my friend”