So Laurie noticed two things on my lesson last week that I need to work on. One came up with counter-clockwise back chassés.  I don’t engage my foot when I push backwards off the inside edge, which means that I lose out on force and stability.  I was dutifully rising and bending on the inside edge, but that was a deceptive feeling, since I basically just used the rise to flatten out that edge.

Once she told me to “get a grip” with my pushing foot, it got much better. At least it did on my left side, where my foot and ankle are nice and strong now. (On my right side, I am still struggling to push correctly, which entails pointing my foot and stretching that oh-still-so-stiff ankle.)

The other problem was that I was still was having trouble keeping my hips in place while transferring from right to left. We worked for a while on just pushing onto a forward outside edge. First we dissected the inside edge push on the right side (which turned out to have a similar need to “get a grip,” and not allowing the edge to come around enough). And then we turned our attention to that left outside edge, in which my hip and the rest of my body was still strangely contorted.

It’s testimony to how contorted it was that I don’t even know how to explain what I was doing (though it’s sorta like having my left hip always ahead and above my right). Instead I will just think about what Laurie said, which is to imagine my left skating hip as being slightly below my right, both on the inside (pushing) edge and on the new edge. This allowed the lean to happen through the hips rather than through the upper body. Another way of thinking about it is that the hips pretty much just stay right next to one another, though because of the lean it feels like one hip is slightly below the other.

For all that I think am improving–feeling like everything is getting better in terms of holding an edge and keeping my hips in place–it’s a bit alarming how all these momentary lapses (a.k.a. “flats” or “hips out of whack”) keep coming back to haunt me.

It’s like the Ghost of Skating Errors Past! But like all ghosts, it means that something hasn’t been resolved.

Back to the drawing board! Luckily I can work on these two things ad nauseam. I’ve even been standing by my desk shifting my weight from one side to another, trying to figure out how the different muscles work. There is something so basic about this that I’m just starting to figure out. I have a whole different set of sore muscles (right glutes, now!)

I would love to end this entry with more than just a note about my sore muscles, but I’m afraid that’s the best I can do before the weekend comes to a close (sigh!)

Oh, I know. I’ll post food pictures from the past week! 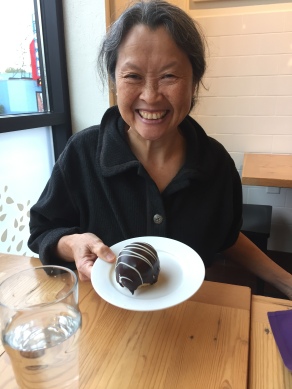 Creampuff from the Co-op Creamery

Chicken satay and pad thai at the Thai festival!

And a link to “The Nightingale,” which is part of Otto Respighi’s “The Birds” (a set of pieces written from 1928, based on the works of composers from the 17th and 18th centuries, and imitating the sounds of different birds). Enjoy!

Here are some lesson notes, since it will be a while before I can do more than just get a grip.