My days of skating tears are hopefully lost past, though I admit that once in a while I would love to throw myself down on the ice and scream just like the toddler I saw earlier this week.

NOOOO! I don’t want to skate!

Not this week though. This one has been one awesome skating-mood day after another. It  all started in a lesson in which I worked on (a) progressives, and (b) swing rolls, and Laurie pointed out that I was not finishing off the latter properly. She suggested that I move my belly button further over (basically rotating my lower core in the direction of travel).

Sweet smell of success! (Or maybe that’s just the pizza place on the corner). I have a much more stable position on both the left and right side. In fact, these edges are starting to feel almost even, rather than having a strong and weak side.

Thinking about where my navel is headed is something both coaches have suggested before. But one of the reasons it seems to work particular well now is that I am trying to move my navel just by using my core muscles. I am figuring out how to isolate this movement in the core and hips, rather than swinging my torso and arms around willy-nilly.

I have been practicing this by warming up with swizzles, both backwards and forwards, trying to concentrate on just the action of my oblique muscles.

These are the lower trunk muscles, and they have several functions. They work with the diaphragm to help with breathing. Contract both sides at once and you bend forwards; contract one side and you do a side bend. And if you work these in opposition, you rotate the torso bringing the left shoulder towards the right hip and vice versa.

So I’ve been running through all my skating moves trying emphasize the action of these muscles rather than the upper body. I focus on giving those obliques a little “scrunch.” All I can say is that it seems to be working.

So while I’m sure I’ll have another one of those “mad skater” moments before long, I’ll just revel in getting “even” for now.

Time for a happy photo! 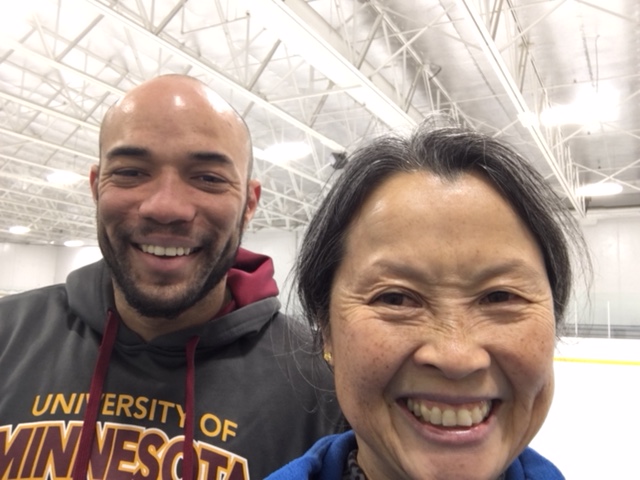 And a happy song from Jeremy Messersmith that my son told me to put on my blog. Everybody gets a kitten!

4 thoughts on “Getting even”