That title doesn’t mean what you think it does. No, I’m not going skating-crazy, although the term “skatinsanity” does come to mind.

Literally, some of my skating problems have to do with the weight of my head. Laurie pointed out today that one of the reasons I’m not bending my ankles enough is that my head is tipped slightly forward, just enough to bring my weight into the wrong place. To counteract this, I send my hips back.

I have been told countless times to look up, but all I do is get my eyes peeking up while continuing to keep my head down. She suggested thinking instead about rolling the weight of the head back slightly. And what do you know? I was in a much better position on the blade, and was able to bend my ankles like a champ.

As I was looking for pictures of skaters to illustrate this “head weight slightly tipped back” position, I realized that they all have their head weight back! I could find very few pictures of elite level skaters who have their heads tipped forward as I do (unless they are doing it for dramatic choreographic effect, or have some kind of terrible moment that we’d rather not think about).

With their heads in the right place, look at them go! 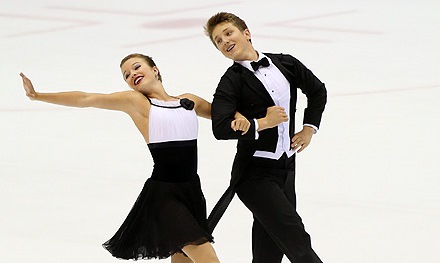 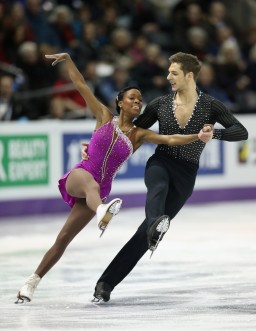 This provides another way of thinking about body position. It especially helps on the transition from back outside edge to forward outside edge. Laurie suggested thinking about not only the head weight going slightly back, but also the movement of the nose “like a rainbow” as I turn forward.

I realize that all these descriptions are pretty strange to non-skaters. But one more before the “skatinsanity” is finished today. When I corrected my head position, suddenly everything got a lot better. My forward progressives were so polished, in fact, that Laurie suggested that I complete the picture by working on my hand position. I tend to droop my wrists (especially the right one) unconsciously, which looks more than a little awkward.  It’s an easy fix, but I haven’t bothered to do it.

As Laurie puts it, having that one strange wrist position is like being in a really gorgeous outfit, but failing to notice that there’s a piece of toilet paper stuck to your backside. Funny!

And a musical selection that is totally unrelated–but I wish I could skate as well as Ben Bliss (what an apt name) sings. Like buttah!